Tourmaline is a therapeutic mineral that has been used for millennia in Eastern medicine and around the world. Tourmaline enhances the flow of chi. The tourmaline particles that are infused into our pet mats are directly bonded to the fibers of the material. The tourmaline absorbs the pet’s body heat and then transmits that energy back into the pet’s body in the form of therapeutic far infrared light.  That energy is converted by the tiny nanometer size tourmaline particles in the pet mat, into the form of far infrared energy. This process is called thermal-photonic conversion. Far infrared saunas have been used historically for their therapeutic value. 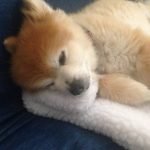 Tony the tourmaline dog is a Pomeranian. He is 13 years old, which is 91 years old in “dog years”. He has been happily using tourmaline products for over half of his life. Could that be why he still looks and acts like a puppy?

The tourmaline in the pet mat also produces negative ions that encourage a more alkaline environment in the pet’s body. Alkalinity promotes healing at a more rapid rate. Other benefits of negative ions, include; scavenging free radicals and reducing inflammation, as well as increasing blood flow and oxygen levels in the bloodstream. Collectively, these benefits will not only encourage accelerated healing, but also a more rapid recovery form physical activities. These pet mats can line a pet bed, be placed on the floor of a pet crate or be placed directly on the floor. The pet mats are rectangular, with rounded corners. They are made of double sided poly-blend lambskin, and are plush, cozy and durable. To clean, simply machine wash and tumble dry.

Pet owners report that our pet mats have been found to significantly calm down their pets during transport, as well as to sooth them on a daily basis. Tourmaline has been shown to encourage the production of alpha brain waves. Alpha waves encourage restful sleep. The tourmaline also helps to increase serotonin levels. Serotonin is called the “feel good hormone”. Increased serotonin has a calming effect on both pets and humans and promotes deep, healthy and restful sleep. We also make products for people too.

1 review for Tourma®Mat for Pets