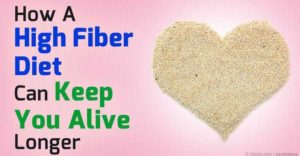 Adequate fiber intake is so crucial to health that Dr. Andrew Chan of Harvard Medical School and Massachusetts General Hospital in Boston, believes that consuming more fiber can positively impact a patient’s risk of dying.

A study was conducted by Dr. Chan of patients that were already diagnosed with colorectal cancer. The study indicated that just an additional 5 grams of dietary fiber that patients would consume in a day, would reduce their odds of dying of colorectal cancer by 22%. In addition, those patients on a high fiber diet also had a 14% lower risk of dying from any cause, as compared to those who reported eating the lowest amounts of dietary fiber.

Low fiber diets have been linked to less microbial diversity in the gut in animal studies. Gut bacteria diversity leads to a much stronger immune system that will help fight many diseases and conditions.

Studies have found that a healthy gut with diversified bacteria more directly influences health and disease than previously thought. The list of diseases and conditions possibly helped by a high fiber diet is a long one. It is mind boggling to think that fiber might be able to help so many things.

The type of fiber is also important. Grains will raise your insulin and leptin levels, which are drivers of most chronic diseases.

Only Eat Moderate Amounts of Fruit

Many fruits contain high amounts of the natural sugar fructose, which is why only moderate amounts of fruit should be consumed, but huge amounts of vegetables are fine. Also beware of eating too many beets, since beets have the highest sugar content of any vegetable.